You know that most colleges require either the ACT or the SAT as a part of admissions testing but which one should you take? We believe that understanding the differences between the two standardized tests shows that the ACT gives you a better opportunity to do well with dedicated preparation.

What is not so commonly known is that some of the really competitive schools require you to take not just the SAT but supplementary subject test as well, while these very same schools require just the ACT. So if you are in this situation it’s almost a no brainer! You can get by taking just one test, the ACT, or several tests; in some cases where you have to take the SAT plus a couple of subject tests.

So why choose the ACT? Well, the ACT is the most popular college admissions test in the US. The number of students taking the ACT surpassed the number of students taking the SAT in 2013 and that trend has been growing. You are probably reading this because you, like many students, perceive the ACT to be an easier test than the SAT and there's some truth to that. The ACT has always considered itself an achievement test which is meant to reflect what you learned in school while the SAT has up until recently been known as a reasoning test. 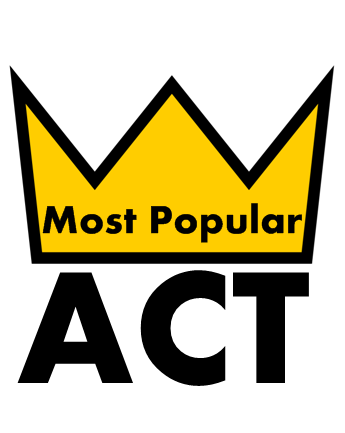 If you're a junior or senior you're probably familiar with the old SAT grading format out of 2400. You might even have some older siblings that took the original SAT out of 1600 and remember its emphasis on obscure vocabulary, tricky math questions and extremely long reading passages. There have been many complaints that the SAT did not do a very good job at predicting success at college either. In addition to that, the SAT used to penalize you if you got a wrong answer! For all these reasons the SAT changed dramatically in March of 2016 and now it looks a lot like the ACT.

For you, we would highly recommend the ACT because it is so much more predictable than the SAT. The ACT hasn't changed much in decades and all four year institutions and universities in the US accept the ACT. There's also a large bank of actual ACT test questions that don't exist for the new SAT just yet. The SAT only recently just released about six practice tests while the ACT has dozens of actual tests that you can practice on.

So at a first glance it looks like the ACT might be a little bit more difficult to complete within the time constraints because you do have more questions but that is a little deceptive. In fact, if we break it down to the individual subsections, you realize there's not that big a difference in the amount of time you have on sections on the ACT versus the SAT.

When it comes down to it you actually don't need that much time on either versions of the test. Andy has had almost no students with a problem finishing the English section because it is a primary language for them. And besides, having more questions on the ACT affords you more room for error. The fewer questions on the SAT make every single question that much more important. So one correct or incorrect answer on the SAT can change the score quite a bit compared to the ACT.

The big difference between the two tests of course is the Science section. On the ACT, you'll be doing a lot of reading about understanding experiments and analyzing data. What's interesting is that this section, which is exclusive to the ACT, has been diffused and spread throughout all the sections on the SAT. So you'll actually see charts, graphs, diagrams and tables in the Grammar, the two Math and Reading sections.  So it's not like you're going to be able to avoid these science topics on the SAT. At least on the ACT they set it apart in its own section so you know what to expect.

Last but not least, the essays are both optional on either test and we would highly recommend you complete it regardless of which test you decide to take. You do get 10 more minutes on the SAT but the kinds of questions that you'll get on the SAT are different to the ACT. In the ACT, you'll typically get a passage; it could be a speech by a renowned politician, a persuasive article in a newspaper, or a short story written by an author. Instead of writing a prospective piece on what you are given you'll actually analyze those passages, essays or speeches, and draft an essay about why it's effective, what's effective about it and how the author presents his or her perspective and arguments.

In the SAT you will be tasked to do something you might not necessarily have done in your literature classes. You're going to be doing more of an expository writing that explains the strengths and weaknesses of how someone argues for rights or speaks about the certain topic. Since there's a lot more reading you will need the additional 10 minutes to complete an effective essay on the SAT.

The ACT is scored out of 36 and the SAT has returned to a 1600 grading scale. The ACT is a little more straightforward, each of the sections are scored out of 36 and they simply average it out. So if you do poorly in one section, a high score on to other sections can bring that average up higher. Whereas on the SAT it's a slightly more complicated scoring rubric, it's not quite one to one or two to one in terms of how many questions you answer correctly and the score that you get.

So overall, after the SAT’s most recent revision the two tests are virtually identical, except for the non-calculator and grading section of the Math section on the SAT. The SAT used to be a test with ten sections that switched randomly between Writing, Reading and Math but it's now structured with four sections that are consistently in the order of Reading, English and two Math sections. The SAT no longer tests archaic vocabulary that we just don't use anymore. It used to emphasize a lot of rote memorization but it now focuses more on common language that we speak on an everyday basis, like the vocabulary that you would encounter in a nationally syndicated newspaper, a lot like the ACT.

Given all of the available resources and predictability of the ACT, we believe that is it is the better test for students to take. Regardless of what you decide is best for you, it’s time to start preparing!

How to Interpret your ACT Score Report

What does your ACT score report mean for you? Y...

You know that most colleges require either the ...

Don't have an account yet? Register for one now! You can also reset your password if you've forgotten it.